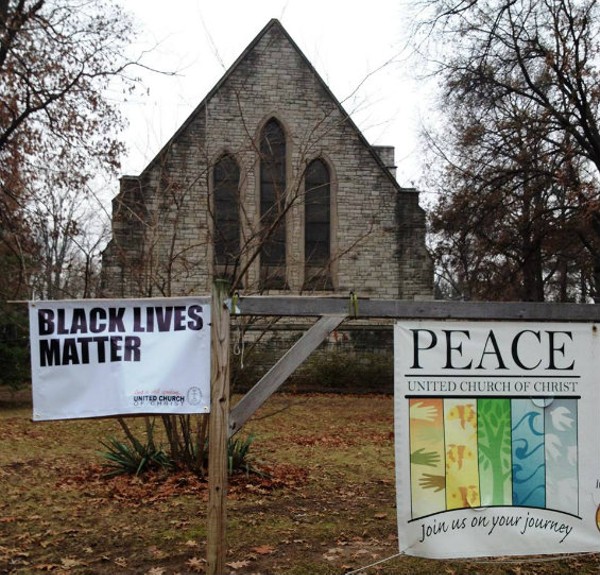 Like so many Americans, I have been watching the current civil unrest from the comfort of my home and wondering, why?  Specifically, I have been wondering how criminal looting, defacing, and injuring private persons, property, and historical monuments can bring justice to George Floyd, his family, and friends.  Now, granted, not all the protests have been violent or destructive; many have been, in fact, peaceful.  But still, I wonder what exactly is being protested?  Officer Chauvin has been arrested, after all, and is awaiting a fair trial: What more can we ask for in a country where all people, regardless of race, creed or accusations leveled against, are guaranteed due process before being deprived of life, liberty, or property?

Yet more alarming, because of the protests, everywhere one turns he or she is confronted with slogans such as, “White silence is violence,” or “Silence = Complicity.”  Such statements drive the fact home that it is no longer acceptable to merely detest racism and its existence.  Instead, the current movement is demanding absolute, overt allegiance to their cause.  The punishment for not overtly supporting the movement, for not bowing the knee: The label of “racist.”

So then, the obvious question is what should Christians do in the face of this social movement?  The answer is simple, really.  Christians must confront this worldview with the truth of God’s Word.  But how?  The first thing Christians should do when confronting this worldview, or any worldview, is identify the foundation of the argument.  With the Black Lives Matter movement, the core of the argument is the following: The systemic root cause of American pain is racism, specifically, racism predicated by whites against blacks; once this systemic racism is eliminated, then there can be happiness and peace in America.  Automatically, the Christian ought to be leery of such an argument, for it is against anything found in the field guide of life: The Bible.  Thus, this cultural movement is nothing more than a stronghold raised against the banner of the King of Kings.  Nothing can tear down this stronghold accept a firm reliance upon every word that proceeds from the mouth of God (2 Cor. 10:5; Matt. 4:4).

I want to be clear here.  Racism is a terrible sin which must be addressed and eliminated in the world.  However, racism is not the systemic root cause of American pain: Rebellion against God is!  Thus, racism is a heart problem which stems from the original and continued rebellion of mankind.  There is but one solution to the rebellion problem; He was foretold of in Genesis, nailed to the cross at Calvary, rose from the grave on the third day, and ascended into Heaven.  His Name is the Name above all Names and He alone brings the Gospel of Peace.  That Name which is the most precious of all names is Jesus Christ, God’s one and only Son, the Second Person of the Godhead.

The Gospel of Jesus Christ, and that Gospel alone, transcends every divide.  Once the divide between humanity and God is bridged by the restoration found in the atoning work of Christ, then, and only then, can human chasms be crossed.  The Gospel of Christ is the Gospel of Peace because Christ the King, subdues, rules over, and conquers His enemies by His Word and Power (WCF, Shorter Catechism, 26).  This conquering power of Christ and the glorious work of the Holy Spirit brings about human submission to the will of God the Father; a will which among other things, proclaims all God’s people shall selflessly love other human beings in sincere humility (John 13:34; Phl. 2:3).  Moreover, there is no place for racism in this Gospel because “There is neither Jew nor Greek, there is neither slave nor free, there is neither male nor female; for you are all one in Christ Jesus (Gal. 3:28, New King James Version Bible).”  This does not necessarily mean, like so many believe, that human distinctions are irrelevant and insignificant.  What Paul is addressing here is the fact that all who are in the covenant of grace (all true believers) have entered into the Covenant the same way: By the grace of God found in the blood of Jesus, which is received by faith alone.  Thus, for the Christian there is truly nothing to boast about other than the grace of God.  So then, the great Gospel of the Lord Jesus Christ declares that there are two kinds of people in this world, and these people are not defined by color but by covenant.  The simple fact of the matter is there is not a division between black and white, but a division between sheep and goats—there are no alternatives.

Sadly, the movement which has taken America by storm is a false gospel, and therefore it is a false hope.  It is a false gospel, because like Marxism, which claims class distinctions (lower, middle, and upper) provide the barrier to true human happiness, this new movement claims racial tensions form the ultimate barrier to American happiness, at least.  Several problems exist with this newly regurgitated thesis.  First, as alluded to previously, focusing on racial problems distracts the attention away from the real problem, which is a heart problem that can only be cured with a heart solution.  Second, because racism is a heart problem, and mankind is incapable of changing his own heart (apart from God’s work), much less the hearts of others, any action taken by men to destroy racism is likely to fail because it will stink in the nostrils of the human conscience.  Finally, because the elimination of racial prejudice is impossible from a human standpoint, it will be most difficult to resist the urge to eliminate different races all together.  If someone thinks that is a far step or foolish assertion, one needs to look no further than the Marxists, and how at this very moment they are attempting to destroy class distinctions in order to eliminate human conflict.

Hence, Christians ought to be against the current movement because it is a false gospel, and false gospels inherently point people away from Christ.  But there is one other reason Americans, not just Christians, generally, ought to join together against this movement: The current movement will eventually result in the further, if not final, erosion of American society.  The intention here is not to make it seem like proponents of the movement are determined to destroy America.  That is not my intention at all as no doubt, many of the people involved with and supporting the movement are well-meaning citizens.  The problem, however, is the focus upon removing racially oppressive institutions from the public sphere.  Chiefly, we must ask by what standard the term “racially oppressive” will be defined?  Will the standard be, for instance, that anyone who refuses to publicly condone the Black Lives Matter movement is a racist?  Or, will it mean that any government institution with any ties to racism must be eliminated from the public sphere?  The potential answers to these questions ought to make every American tremble with fear because if certain standards are employed, the elimination of the Declaration of Independence, the United States Constitution, and the subsequent Bill of Rights, could follow.  This is because, historically speaking, the foundational documents for this country, which secure our beloved liberties, were crafted by white, European slaveholders.  What is to stop the Black Lives Matter movement from demanding the removal of these documents, and therefore our liberties, because they are “racially oppressive,” simply because of who created them?

Make no mistake about it, this social movement certainly has the momentum to transition towards institutional upheaval at the national level.  This topple, however, would only open the door for further racism because the foundational documents of this country, though crafted by European slaveholders, espouse Biblical principles of liberty, justice, and equality which undermine the very core of systemic racism.  The Declaration of Independence, which is the foundational, organic law of these United States, asserts, “all men are created equal,” and are, therefore, endowed with certain inalienable rights.  This phrase implies, among other things, that all people have innate worth because they are created by God.  The theological term assigned to this philosophy is Imago Dei, the image of God, which is taken directly from the Christian’s Organic Law (Genesis).  Though Jefferson and others understood this phrase as being primarily applicable to white Europeans, it was, nonetheless, the impetus of nineteenth century abolition.  In this tumultuous time, all would do well to recognize that removing the foundation of American government from the public realm will mean the final removal of the Bible from that realm.  No Bible, no absolute truth; no absolute truth, no rule of law; no rule of law results in anarchy.  There is but one human solution to anarchy: Despotism.

In closing, Christians, specifically, and Americans, generally ought to be against the Black Lives Matter movement.  It is a false gospel which promises a false hope that detracts away from the simple, yet profound message of the Gospel: Christ alone can bring human peace.  Additionally, all Americans ought to be concerned about what this movement means for American liberty.  Yet more importantly, while Christians in this nation ought to be against the movement, we ought to also explicitly emphasize that we are for Christian love, mercy, justice, and true humility.  This means that as Christians we must endeavor to be more like Jesus Christ in every area of our lives.  Therefore, we must search our hearts and see if there are any prejudices in them.  If there are, we must repent and pray that God will help us remove those prejudices for the sake of His Kingdom and glory.  This leads to the final point.  This most certainly is a turbulent time in our nation’s brief history, and many recognize she may be at another breaking point.  What we need is national healing.  Healing that will not come from a social order eliminating racism or poverty, but healing which can only come from the sovereign, omnipotent hand of God.  In speaking of the healing America so desperately needs, I am reminded of a passage of Scripture which once held a prominent role in America’s political culture—a passage which many American Presidents had their Bibles open to when swearing their oaths of office—”if My people who are called by My name will humble themselves, and pray and seek My face, and turn from their wicked ways, then I will hear from heaven, and will forgive their sin and heal their land (2 Chron. 7:14, NKJV).”  May God grant His people repentance so that we may return to Him in earnest prayer; then, He will heal this land from her rebellion against Him.  Only then can there be a true and lasting peace on earth and goodwill to men.

Last week the Institute’s Executive Director had the opportunity to give the first community lecture at SOLA Appalachian Christian Retreat. See SOLA’s blog for the text of the lecture: God’s Speech and Human Knowledge. 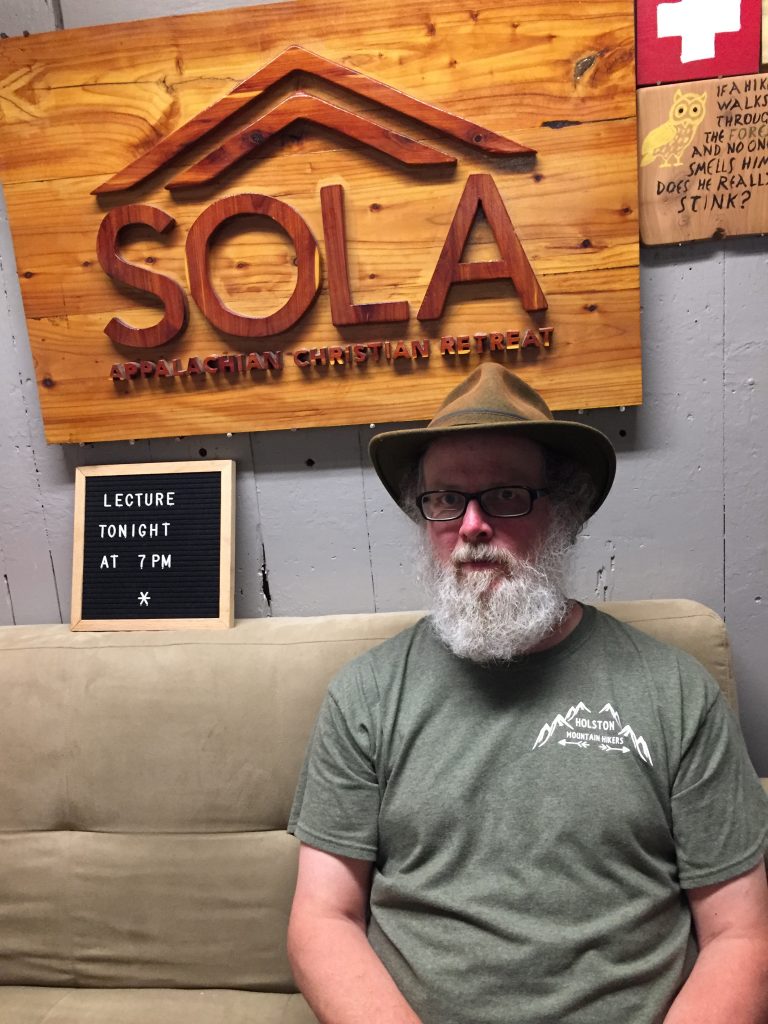 SOLA is a ministry to Appalachian Trail hikers and others who seek retreat into the mountains. It is overseen by Doug and Priscilla Douma. The ministry is multi-faceted. The first goal and primary emphasis in its early stages is to provide a Christian hostel for AT hikers. In accordance with that the main purpose of our director’s visit with his family to New York was to work on SOLA’s facilities. This included working on the indoor area (bathroom, stairs-painting, etc.), outdoor patios, and the difficult removal of a large tree on the premises. A secondary vision of the ministry is to provide a mountain retreat study for pastors and ministers.  A corollary of this second vision is to provide lectures for the community and others who might have occasion to visit the hostel.  It was toward this purpose that the Geneva Institute was pleased to make an honored contribution by providing the first lecture at SOLA!

Receive notice of new anouncements and articles via Email.